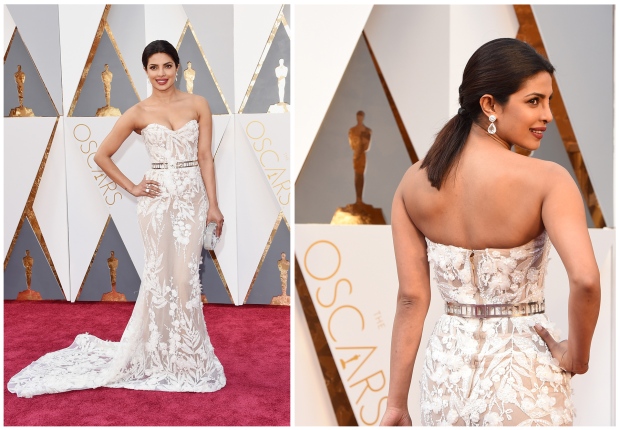 The stunning beauty of Bollywood Priyanka Chopra, made her Oscar debut at the 88th Oscars on Sunday Night, at Dolby Theater, Los Angeles, California. She was there to present an Oscar for a particular category. She looked all beautiful and stunning in Lebanese Designer Zuhair Murad dress, in White Tulle and Nude Base with embroidery all over. Her Bold lips and diamond earrings matched her look perfectly. Keeping it simple the dress was teemed up with a belt from Zuhair Murad collection. A clean back ponytail, further added to the clean and crisp styling.

The Actress who has already made India proud by featuring in American Television series ‘Quantico’, for which she has received appreciation from all over, was also awarded people’s choice award in America for this series.

She presented an award for Best Film Editing with actor Liev Schreiber and was introduced as ‘Priyanka Chopra a Veteran of over 50 Bollywood films!’. Well we wish her all the very best for all her upcoming projects in Bollywood and Hollywood. She will also be seen in the upcoming Baywatch series alongside famous Hollywood actor Dwayne Johnson, popularly known as The Rock.