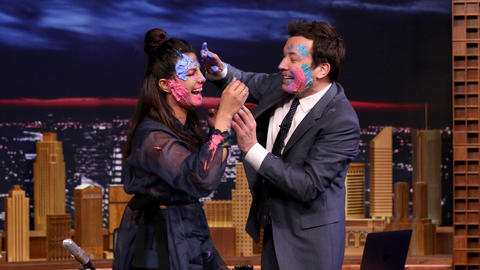 Well when everyone was busy playing holi with their loved ones here in India, our very own Bollywood star Priyanka Chopra was seen feeling a little homesick as she appeared on the popular Jimmy Fallon show for the 3rd time. The Quantico star looked gorgeous in a blue dress and a half bun hairstyle.

But the major highlight of the show was that she and jimmy engaged themselves in a riot of colors by painting each other’s face in vibrant hues as a custom done on holi in India. A Holi far away from the Indian land on an international show. Well we would say that our desi girl surely knows how to be an International star with all the desi vibes.

Priyanka Chopra has become an international face ever since she appeared as a main lead in American TV series Quantico, followed by various international talk shows like The Jimmy Kimmel Show, The Ellen Degeneres Show.

She also won people’s choice award for her role in Quantico. Well soon she will be seen debuting in Hollywood with the famous Baywatch series, alongside Dwayne Johnson.

Here is a video from the talk show…….