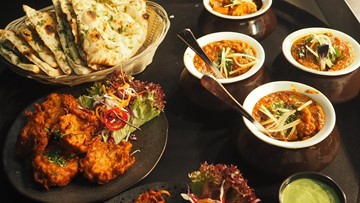 If you haven’t heard, Malaysia is a hotspot for any true foodie that loves Indian cuisine. Back in the 19th century, Indian labourers came to Malaysia to work on rubber farms and railways. By that time, they had brought all of their recipes with them. Much of Malaysian Indian cuisine today is predominantly of South Indian origin. But it’s not just South Indian cuisine that’s popular in Malaysia. Indian Muslims or commonly known as Mamak cuisine are popular too due to the widespread of Mamak restaurants. If you’re looking for a lunch that isn’t your typical Indian fare, keep reading as we revealed five of the unique Malaysian Indian dishes.

Nasi Kandar is one of the most popular Malaysian Indian dishes. Traditionally associated with Penang, Nasi Kandar is steamed rice served with a variety of curries and side dishes. You can order mutton, seafood or fried chicken and include many scoops of different curries on top. On the side, green vegetables can also be added. If you’re wondering where the word “nasi kandar” comes from, it comes from when hawkers would balance the kandar pole on their shoulders. They would be carrying two massive rice meal containers and sell them to the public. The name persisted and many Indian Muslim eateries now use the term.

Believed to be originated from Persia, Nasi Briyani is rich in flavours and spices and was embraced by Indians. This unique cuisine is a rice-based dish with spices, meat and veggies. The two-step cooking method, where the rice and meat are cooked separately, gave the dish a rich flavour. These elements are then combined using slow oven cooking or commonly known as dum cooking to draw out the meat’s juices and release the aromatic spices like saffron, cinnamon, cardamom, and cumin. The meal would be completed with a simple achar of pickled vegetables or cold raita. The abundance of spices and condiments needed makes it more difficult to make which explains why many people enjoy eating it.

Many Malaysians enjoy Indian flatbread, popularly known as Roti Canai, for breakfast. It is the epitome of taste and simplicity. It’s no surprise that this menu is found in Mamak restaurants around the country because it is said that they brought them from India. Roti Canai is traditionally eaten with dhal (lentil curry) or any curry, like chicken or mutton curry. Thanks to its versatility, Roti Canai today exist in a wide range of savoury or sweet varieties. Foodies get to enjoy theirs with a variety of toppings and fillings such as eggs, sardines, and onions. If you prefer yours sweet, don’t worry because they can fill it with sweet fillings like condensed milk, Nutella, or peanut butter. You can order and eat it at home as well. Simply reheat the meal and curry on the stovetop, and you’re all set.

Pasembur is a famous cuisine in Penang, where it can be found along Gurney Drive. Rojak Mamak is another name for it in different parts of Malaysia and for your information, Rojak is a Malay word that means “mixed’’. In essence, Pasembur is a salad of fried bean curd, boiled potatoes, hard-boiled eggs, jicama, and shredded cucumbers, all topped with a thick sweet and spicy sauce. Customers can add noodles to their Pasembur at most eateries. For a full experience, the sauce must be produced properly, without being excessively sugary or runny, and some long-time merchants have mastered this. Pasembur is typically consumed during lunch or teatime and it is commonly sold with cendol as a refreshing dessert to wash down the meal.

The last dish you should have if you visit Malaysia is banana leaf rice. Originated in South India, this meal consists of rice topped with three or four various vegetable dishes and served on a banana leaf. Traditionally, only vegetarian gravy is offered with rice. However, most restaurants now provide a variety of curries, fried meats, and seafood. Additionally, you can try unique complementary sides like deep-fried bitter gourd and pumpkin. Try the crunch pappadom too which are large crisps consisting of lentil, chickpea, and gramme flour as well as rice flour. Finish your meal with lassi, a delicious yoghurt drink. Banana leaf rice is traditionally eaten with your hands for a fuller flavour, but cutlery can always be requested. Although banana leaf is often served from mid-afternoon to late afternoon, some restaurants serve it late at night.