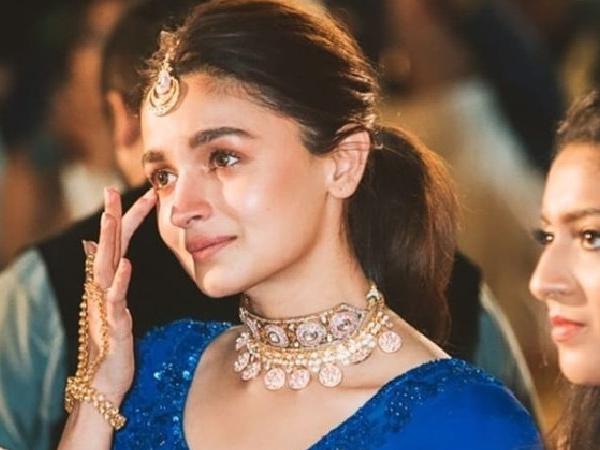 Alia Bhatt recently took a break from work to attend her best friend Devika Advani’s wedding. She shared pictures and videos from the pre wedding and the wedding ceremony and it has taken over the internet since then.

In one of the pictures, she is seen putting turmeric paste on the bride’s face while posing the biggest smile. She wore a pastel lime green anarkali suit from Devnagiri for the Mehndi function, along with golden wedges and statement earrings.

She was also seen wearing a pastel yellow and powder blue lehnga from Anita Dogre for one of the functions.

In an another picture she is seen wearing a floral ensemble, basically a voluminous skirt and a frill top by Anushree Reddy.

For the sangeet ceremony she performed on the stage with her girl friends to the hit song ‘Lamberghini’ and also gave a speech for her friend. She said that she would try to speak without crying and shared a story from when they used to be kids. She said they would play Actor-Actress together and would take turns playing the boy and the girl. However, her friend always ended up playing the girl and she would always be the boy. She also thanked the groom for taking that role from her for life. Watch the emotional speech here….

For the wedding, she wore a stunning bright navy blue sharara set which was draped like a saree and completed the look with a pink traditional choker and tikka. Sharing a picture of the couple she captioned, ‘There’s no better feeling than watching your best friend marry the man of her dreams AND her best friends dreams ? This wedding was all things beautiful.. Can’t belive my baby girl is married ❤️ I love you guys..’

Alia’s last film Gully Boy has been going great at the box office and has already made Rs 100 crore at the box office. She recently completed the shooting for Kalank, and will also be seen in Brahmastra alongside Ranbir Kapoor later this year.