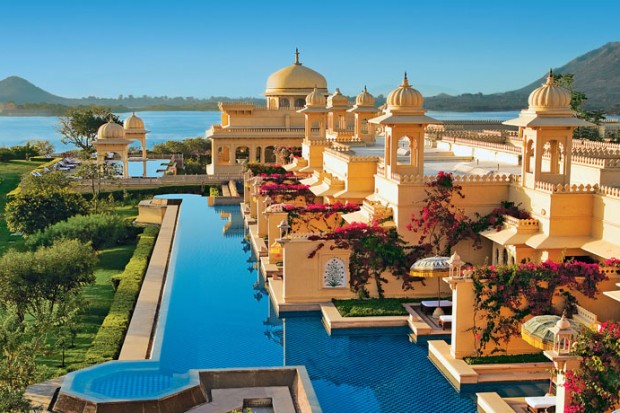 Rambagh Palace, Jaipur– Considered as the most expensive hotel in the country, its Grand Presidential Suite can cost you 6,00,000 a night. Its a Heritage hotel built in 1835, and was a residential of Maharaja of Jaipur. The last of the India’s princely celebrations was held when the only daughter of the family wedded the heir-apparent of Baria. The two-week extravaganza still stands in the Guinness Book of Records today as the world’s most expensive wedding. Maharani Gayathri Devi, who was considered as the most beautiful women of the world by vogue magazine in 1940, also gave birth to her son Maharajkumar Jagat Singh in 1949 in the same palace. Rambagh remained the home of Jaipur’s Royalty until 1957, when it was first converted into an upscale hotel that they continued to manage. In 1972, its legacy of hospitality was passed on to Taj Hotels Resorts and Palaces.  Prince Charles, Jacqueline Kennedy have also lived in this hotel.

Taj Lake Palace, Udaipur– One more Heritage property managed by the Taj group, also will cost 6,00,000 for its Grand Presidential Suite.The Lake Palace was built between 1743 and 1746 and was formerly known as Jag Niwas after the name of its founder Maharaja Jagat Singh II. Bhagwat Singh decided to convert the Jag Niwas Palace into Udaipur’s first luxury hotel. In 1971, Taj Hotel Resort and Palaces took over management of the hotel. The hotel operates a speed boat which transports guests to the hotel from a jetty at the City Palace. It has been voted as the most romantic hotel in India and in the world. James Bond film ‘Octopussy’ was filmed on the premises of this palace.

The Oberoi Udaivilas, Udaipur– Located on the bank of Lake Pichola, The Oberoi, Udaivilas stands on the 200 year old hunting grounds of the Maharana of Mewar. Spread over a luxurious fifty acres, which includes a twenty-acre wildlife sanctuary with deer and wild boar, The Oberoi Udaivilas affords spectacular views across the verdant gardens and sparkling Lake Pichola. It was also named as the best hotel in the world in 2015, and 4th best hotel in world in 2012. One has to spend 5,00,000 for its Kohinoor Suite.

The Oberoi Amarvilas, Agra– This Hotel ranks amongst the top ten hotel spas Asia-Pacific, Africa, and the Middle East of the Travel+ Leisure magazine, and ranked third in Best Hotels in Asia in 2007. Its just 600 mts from Taj Mahal. Its Kohinoor suite costs 2,50,000.

The Taj Falaknuma, Hyderabad– Falaknuma Palace  is one of the finest palaces in Hyderabad. It belonged to Paigah, Hyderabad state, and it was later owned by the Nizam of Hyderabad. It was built by Nawab Vikar-Ul-Umra , prime minister of Hyderabad then. The Nizam used the palace as a royal guest house as it had a commanding view of the entire city. The Falaknuma fell silent after the 1950s. The last guest important was president of India, Rajendra Prasad in 1951. The palace was mostly kept closed since then and underwent a huge restoration after it was given on lease to the Taj Group of Hotels. In 2000 Taj Hotels, started renovating and restoring the palace. The renovated hotel was opened in November 2010. The Grand Royal Suite costs 1,95,000.